Urine drug screens test for the presence of specific drugs and medications. It's most commonly used in the workplace to detect substance abuse issues or in a medical setting, for doctors to check for prescription drug abuse or the use of illegal substances. Or, it may be used in emergency treatment, so that EMTs can quickly screen for drugs that could explain a patient's symptoms or unusual behavior.

A sensitive, accurate urine testing can make a difference in treating someone who may be having a medical emergency or ensuring that any disciplinary action at work is fair and based on accurate information.

What Drugs Typically Show Up On a Test?

Urine screenings also pick up street drugs, such as:

Sensitive tests can detect not only the presence of one or more drugs in an individual's urine but also the amounts of each. Urine tests are an alternative to a breath test or blood test when an individual is suspected of consuming alcohol. They can also be used to detect nicotine and cotinine, which is a substance produced by the body as it breaks down nicotine in the system.

How Does the Amount of a Substance in Your System Factor Into Drug Testing?

Frequent or heavy use may cause the drug to remain in the system longer than occasional use. For example, using marijuana once may result in the drug being detectable for only a few days, while frequent, daily use means that the drug may remain in the person's system for up to a month after the person last used the drug.

For the most part, however, drugs and alcohol take about 2 hours to start showing up in a person's urine. While the amount of the drug you take can determine how long it stays in your system, the urine test itself simply tests for the presence of the drug, not the concentration of the drug in your urine.

For example, alcohol metabolizes at the rate of one drink per hour (an ounce of liquor or one 12oz. beer). If someone drank 10 shots, then alcohol would be detectable in their urine for about 10 hours, even if they stopped drinking several hours before the test was administered.

How Accurate are Drug Tests?

Urine drug tests use "cut-off levels," which indicate that a person's urine must contain a certain amount of the substance in order to be considered a positive result. For example, people that may eat a poppyseed bagel and then take a drug test may have a false positive for opium. To limit this and other accidental false positives, there's a threshold that must be reached in order for a test to be positive, which varies with each type of drug.

The type of test may also affect the results, as some methods are more sensitive and therefore, more accurate than others.

Testing strips typically test for the presence of a specific drug, one for each strip. In a lab test, however, which uses immunoassay, mass spectrometry, or chromatography, the results can be more accurate than a simple yes-or-no and may even be able to detect whether or not the person used the drug that day or if it's still in their system from using a day or more prior. 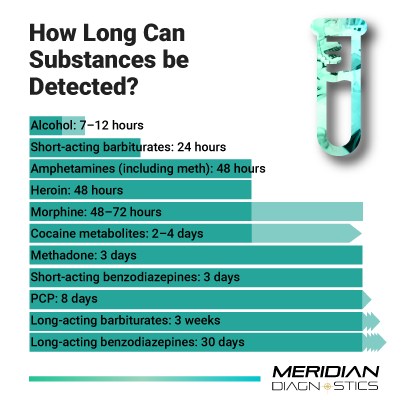 Different drugs will have a different length of time for detection. How long depends n a few things, including:

A urine test can detect the presence of each drug within a certain period of time, but these times vary due to how long drugs take to be metabolized by the body. In general, expect drugs to stay in the system for:

The more sensitive the test and the more accurate the lab conducting the test is, then the more reliable the results will be. Rhyan Walcott, Chief Executive Officer at Meridian Diagnostics, states "Many of our toxicology clients range from drug rehabilitation and medically assisted treatment (MAT) centers, to hospitals and primary care physicians. Meridian Diagnostics recognizes that fast results are key in the healthcare space, so we ensure that our state of the art mass spectrometers are routinely maintained and provide the most accurate results."

Do You Need Reliable Drug Screening and Confirmations?